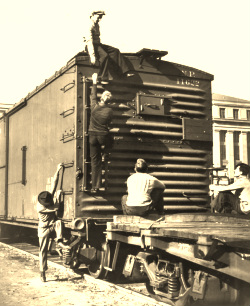 Stereotypical Box Car Hobos
Hoovervilles -  "Hooverville" became a term for shanty towns during the Great Depression.  Hoovervilles were named after Herbert Hoover the President, who was widely blamed for the Depression.  Shanty towns were made by homeless people who had limited resources. Therefore, the "towns" consisted of shacks and other makeshift housing.  There was a large concentration of hobos and tramps in shanty towns because of the economic downturn, as a result of which many people lost their jobs and homes.  Hooverville residents were forced to beg for food or visit soup kitchens and bread lines.  Hoovervilles lasted until 1940, when the economy had mostly recovered and shanty towns were no longer needed.

The Dust Bowl -  The farmland in the driest states - Oklahoma, Texas, Kansas, and Colorado - were called the Dust Bowl after Black Sunday, April 14, 1935, when a sixty miles-per-hour dust storm hit the states.  Many dust storms had occurred leading up to this day, but Black Sunday's storm was the worst by far.  "The Dust Bowl" can also refer to the time period in the thirties during which devastating sand storms hit the plains.

Hobos -  Hobos in the 1930s were nomads and vagabonds.  These people had no prospects at home and so hitched rides on freight trains looking for work, food, or just a place to sleep.  Despite popular belief, hobos were not layabouts.  The reason they hopped trains was to find work elsewhere.  Approximately 20,000 people adopted the hobo way of life during the Great Depression due to economic devastation and decreasing available jobs.  In modern times, the term is mostly used referring to those who, in the 1930s, would be considered bums (people who were neither inclined to work or travel).

Soup Kitchens and Bread Lines -  Around 1932, after the stock market crashed and the economy took a turn for the worse, about twelve million citizens lost their jobs.  Because they were unemployed, these people had no way to pay for their homes, let alone keep themselves and their family fed if they had one.  Hobos, out-of-work parents, and children visited bread lines and soup kitchens to remain fed.  These places were called public charity, because so many citizens were in need.  Soup was served because it mostly consisted of water, which was easier to obtain than other types of food.  The first soup kitchen was started by Chicago gangster Al Capone, who did so in order to improve his reputation.  Soup kitchens still exist in America today.  They aim to assist struggling people and families. 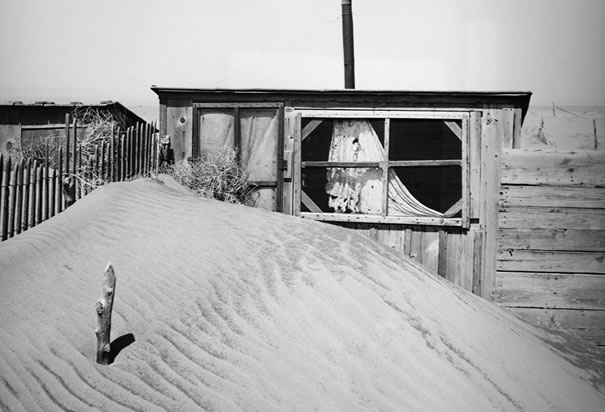 Sand storms in the Dust Bowl caused damage that was difficult to fix, because the dust made its way into tiny cracks in housing and formed piles (pictured above) in inconvenient places. The sand also posed health threats to humans who would breathe in the dust and get sick. The damage to their lungs was often fatal. 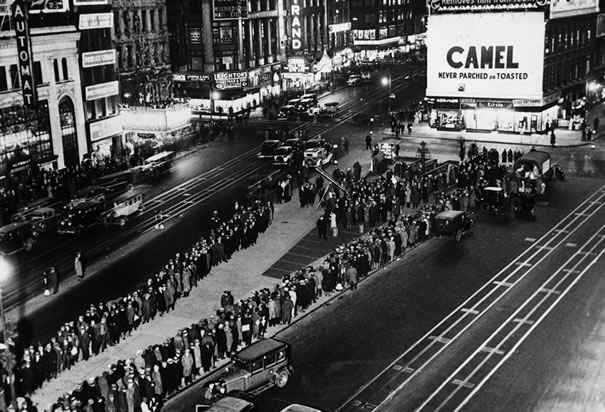 Industrialized northern cities were the first to deal with the effects of the growing depression. Pictured above is the breadline in Times Square, New York.