The new deal was a plan that Roosevelt and Congress put into action to hopefully overcome the Great Depression.  The new deal focused on the three general goals:  relief, recovery, and reform.  Relief meant that the government was taking immediate action.  Recovery meant that the economy was going to be restarted and reform meant that America would be able to avoid another depression.

Federal Emergency Relief Administration  (FERA) 1933
Direct relief -  money given to the states - states could use the money in their state for any relief they felt necessary.  At one time - 8 million families could be on direct relief. 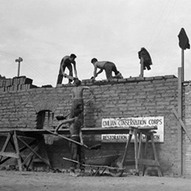 
Public Works Administration (PWA) 1933
Purpose - to help the construction and building industry recover government contracts granted to private firms for the construction of public works.  Federal government encouraged state and local governments to carry on their own projects - offered them loans and "gifts" to build. 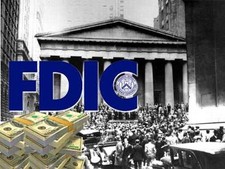 Glass-Steagall Banking Act  (1933)
Purpose - to protect bank depositors and the banking system
1. Seperated Commercial from Investment Banking
federal regulation to insure that banks do not use deposits for speculative investments (repealed in 1999)
2. Federal Deposit Insurance Corporation (FDIC)
federal government insured the money of bank depositors
3. Increased the power of the Federal Reserve Board to regulate interest rates

National Industrial Recovery Act  (NIRA) 1933
Purpose - to revive industry by getting employers to work together - urged cooperation instead of competition.  Businesses were to form cooperatives to eliminate unemployment and raise wages.

Social Security Act (1935)
1. Unemployment Insurance - payroll deduction workers contribute to a fund - employers contribute for each worker - if unemployed, workers draw money based on their contribution
2. Old-Age Pensions - payroll deduction retired workers collect pension based on their contribution.  Must work to collect both one and two
3. Aid to widows, handicapped and dependent child

The new deal not only affected the American society in the 1930's, but also in the decades that followed.
“Our greatest primary task is to put people to work.”
- FDR